Whovians are all astir this week following the BBC’s casting announcement for the next Doctor. It’s typically an exciting time for fans of Doctor Who, whose central character has the ability to conveniently regenerate into a new body every couple of seasons. It’s a clever plot device, and perhaps the main reason the show has had such a long run time.

Previously the role has had a parade of actors filling in for the Tardis-driving alien from Galifrey, including most recently Peter Capaldi, Matt Smith and David Tenant. And while they all brought their own flavour and zest to the role, they have all had a lot in common – notably:

They were all men.

Which is fine, for the record. Characters have to have some form of identity and it just so happened that for the last 36 seasons the Doctor was male. It was perhaps a little problematic that his companions were usually female, and usually in love with him, establishing an undeniable power imbalance. But that’s another topic for another day. For now, my point is simply that the Doctor just so happened to be male until now and that was fine.

Of course the reaction has been exactly what you’d expect: disappointing. Many people voiced their concerns about Whittaker, often beginning with the classic “I’m not a sexist, but…” caveat that people still think excuses their sexism. Many people made derogatory comments at Whittaker’s expense, some threatened they would boycott the show, and one media outlet responded by posting naked photos of Whittaker in their coverage of the announcement. Real classy, guys.

To clarify, I’m not disappointed in the casting choice. I’m not too familiar with Whittaker’s work, but up until now they haven’t got it wrong when it comes to casting everyone’s favourite alien, so why would they start now? I have faith that she will make an excellent Doctor, as I’m sure she has already proven to the show creators.

But there is a very, very, very vocal minority (yes – a minority) that is throwing a tantrum because their precious Doctor is regenerating as a woman.

The Doctor. A timelord. A character not from this world. An alien. The last of their kind (in the new series at least). A creature with two hearts and strange powers and a space ship that looks like a police box but it’s bigger on the inside and can travel through space and time. People are having a fit because this Doctor – this impossible character – is now a woman.

Imagine literally being angry that, after 36 seasons of male Doctors, they decided to try out a female Doctor? Imagine masculinity so fragile that one woman in a crowd of men was enough to send the internet into a spin?

Twitter statistics indicating that around 80% of users reacted positively to the announcement. But 20% of people are mad. Fingers have been pointed at ‘social justice warriors’ and ‘feminazis’ and people being ‘too politically correct’ for ruining their favourite sci-fi show. But in their fickle rage they have perhaps forgotten that this announcement was a long time coming. Because sci-fi has always been progressive. 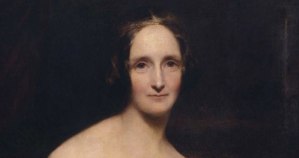 When you consider the origins of sci-fi it should come as no surprise that we have landed here – with a female Doctor. Mary Shelley is often credited with the first true work of modern science fiction with her story Frankenstein. Shelley was one of very few female authors in her time, and faced many setbacks in her career based on her gender. But she pushed through, and ended up writing one of the most infamous characters in literature history – Frankenstein’s Monster.

Since these empowering origins, the genre has taken leaps and bounds in reflecting societal progress. After all, consider the meat of the genre. Science fiction plots often centre on futuristic science experiments and exploration of the unknown – progress is at the heart of the genre. Why would science fiction – which pushes the limits of the imagination and presents life as it could be – fall at the mercy of outdated gender norms?

Science fiction has produced some of the best heroines in all of fiction. Princess Leia, who later becomes General Organa, is an iconic character layered in feminism and general baddassary. Sarah Conner is pivotal in the Terminator franchise and fights her own battles to keep her son safe. Dana Scully from the X Files kicks just as much ass in her role as Special Agent, and even Leela from Futurama cannot be discounted for her heroism in the midst of comedic disaster.

Doctor Who itself has produced some amazingly strong female side characters, such as Riversong, Donna Noble, and Martha Jones. Strong women can be found all throughout sci-fi; perhaps not always in the spotlight, but they are there. They have been for some time.

But it’s time to step off the sidelines and into the spotlight. Out of the romantic subplot and into the crux of it all. We have these strong female characters, but now it’s time to put them into leading roles where all strong role models belong. Because representation does matter, and it’s important that girls see strong women leading the way from time to time – if not at least half of the time.

We need to embrace lead characters that are different and not feel threatened by them. We need to make room for women and minorities to make equal contributions without lashing out and demanding that they sacrifice one of their few beloved minority leads as payment for every new lead. And we need to give media the chance to progress forward, and not resist change so forcefully if just for the sake of resisting.